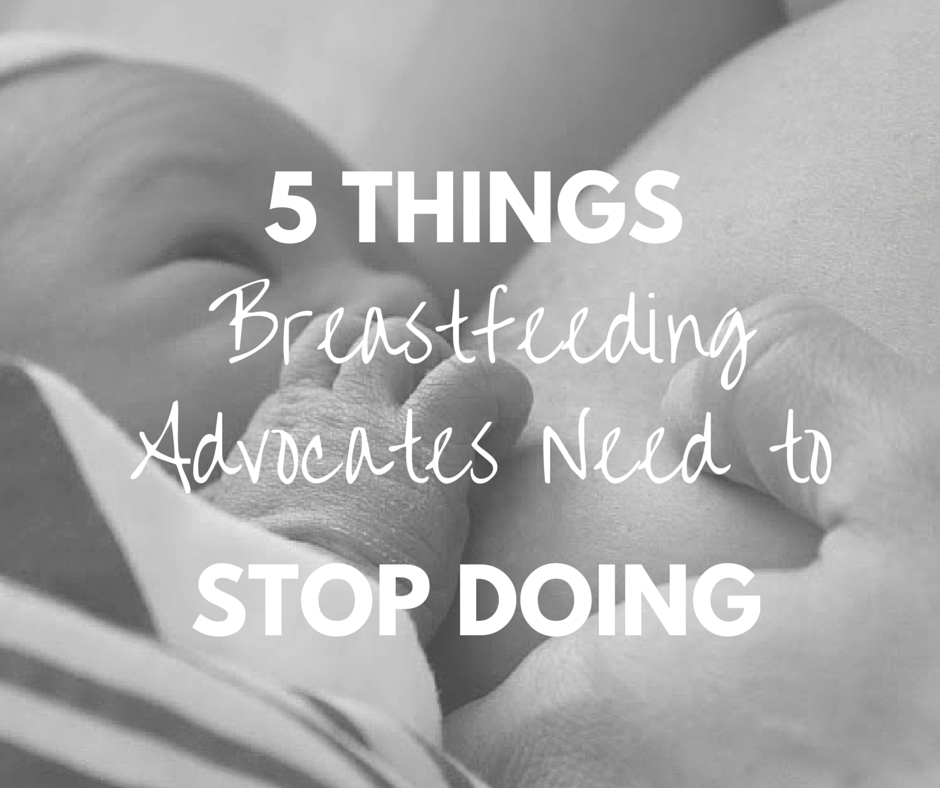 I consider myself a breastfeeding advocate. I breastfed all three of my children through toddlerhood. My mom was a La Leche League leader when I was little and recently retired as a professional lactation consultant. I grew up knowing the ins and outs of breastfeeding benefits (or the risks of not breastfeeding, if we want to go with that spin). I’ve written multiple posts explaining and defending extended breastfeeding and breastfeeding in public. Big honking breastfeeding fan, right here.

However, reading through the comments and debates that inevitably pop up when breastfeeding is discussed, I’ve become a bit disenchanted with some recurring themes in breastfeeding advocacy. I’m not usually one to police someone else’s way of doing things, but when advocacy turns people off . . . well, that’s not advocacy. Obviously, some people are going to be turned off no matter what you say, but if your goal is to support mothers, to improve breastfeeding rates, to help normalize breastfeeding and create more comfort in seeing/discussing/doing it, make sure your advocacy is actually turning people in those directions, not away from them.

Here are five habits those who consider themselves breastfeeding advocates need to check:

1) Arguing with moms who say they were unable to breastfeed.

If a mom asks you what she might do next time to make it work, that’s the time to suggest some options. Telling a mom who was unable to breastfeed—for whatever reason—what she should have done or not done is neither productive nor kind. Most of the time, it will just make that mom feel guilty or resentful or defensive—which is not the goal of breastfeeding advocacy.

Aside from the few times that formula has actually been poisoned, formula is not going to kill a child. It’s really not. Yes, it’s nutritionally inferior to breastmilk. Yes, it’s lacking many things beyond mere nutrients that breastmilk offers. Yes, breastmilk is the optimal food for a baby. Yes, formula manufacturers have some major marketing ethics to answer for and are by no means on my list of favorite companies.

But in some cases, formula saves lives. It is the most acceptable alternative for those who, for whatever reason, don’t have access to breastmilk. And it’s hurtful to those who feed their babies formula to insinuate that they are poisoning their child. We don’t have to demonize formula in order to celebrate the awesomeness of breastmilk. Let the facts speak for themselves.

3) Assuming that someone who didn’t breastfeed doesn’t know the facts.

Speaking of facts, some breastfeeding advocates seem to feel that bombarding someone with information will surely be the key to changing their mind about breastfeeding. But there are some moms who know all the facts about breastmilk and breastfeeding and choose not to breastfeed anyway. I know that’s a hard one to swallow, but remember that there are some very private, totally understandable reasons a woman may choose not to breastfeed. (Sexual molestation, mastectomies, nipple issues that couldn’t be resolved—just to name a few.) Women may not want to go into detail about why they aren’t breastfeeding, even when they know all of the facts. As an advocate, making sure information is available is vital. Providing facts when asked for them is commendable. Hounding someone with facts in the hopes of helping them see the error of their ways is presumptuous and a bit rude.

4) Refusing to sympathize with people who are uncomfortable with breastfeeding.

This one might come as a surprise, considering how vocal I’ve been about breastfeeding in public. I don’t think that it’s a breastfeeding mom’s responsibility to make sure people are comfortable, but I also don’t think that being uncomfortable with breastfeeding means you’re evil. I think discomfort with breastfeeding is an unfortunate but perfectly understandable reaction to our society’s lack of exposure to normal, non-sexual breast function. I feel for people who are uncomfortable seeing a baby breastfeed. I really do. They are part of the reason I think moms should breastfeed in public—not to force people to deal with it, but to hopefully, gradually normalize it.

I said it before and I’ll say it again—people who grow up seeing breastfeeding do not see it as a big deal. That discomfort is totally a result of not seeing it, or of only seeing it on rare occasions. I can sympathize with that discomfort. I don’t think it should be coddled, but it wouldn’t hurt to be understanding of it. And since a lot of women don’t breastfeed because of that discomfort, a listening ear and some diplomatic discussion about it will go much farther than browbeating.

5) Letting your passion about breastfeeding come out as snark.

This is really the biggest one. Whooo boy, I’ve seen some super snarky comments on all sides of breastfeeding debates, but it makes me cringe when breastfeeding advocates are the ones doling it out.

Most of us who feel strongly about breastfeeding can slip into snark every once in a while. Sometimes it’s out of sheer annoyance at having to defend something normal and natural over and over again, sometimes it’s because an argument is so over the top that snark just slide right out, and sometimes, frankly, it’s out of self-righteousness. We need to check that and remember our goals as advocates.

Snark can feel satisfying as it comes out, but it doesn’t convince anyone of anything. Snark rallies those who are already in agreement and alienates everyone else. If our goal is to increase breastfeeding rates and help women feel comfortable and empowered to breastfeed, getting snarky with those who are not there yet will not help them get there.

Snark is counterproductive in almost any advocacy situation. It puts people on the defensive and causes people to dig in their heels out of instinct. Not exactly a productive way to help someone get comfortable. And if your goal is to change someone’s mind or shift their view or expand their horizons, well, snark isn’t the way to do that, either.

As advocates, we have to be clear about what our purpose is and ask ourselves whether the comment we’re making, questions we’re asking, or information we’re sharing—as well as the manner with which we are expressing ourselves—is truly helping move people toward or away from breastfeeding. I know that it can get tiring to constantly have to fight ignorance and defend the simple act of feeding a baby, but we can’t let our defense run roughshod over our offense. Effective advocacy attracts people; it doesn’t turn them away.

(Hey! Check out this $19 online breastfeeding class from certified lactation educator Stacey Stewart that tells you everything you need to know about how to successfully breastfeed your baby. Learn more from my affiliate link here.)

For more posts on breastfeeding, see:

What’s So Hard about Covering up to Breastfeed in Public?

Is it Immodest to Breastfeed in Public?

Digital Lynchings, Feminist Tyranny, and Other Travesties of Breastfeeding in Public

Why Would You Breastfeed a Child Who’s Old Enough to Ask for It? 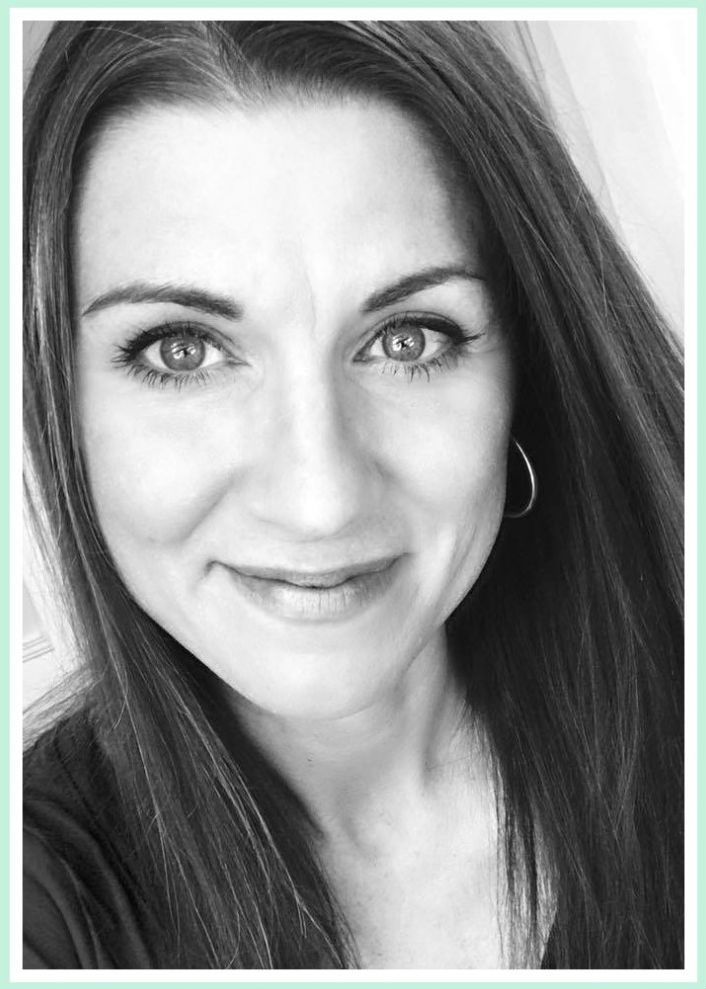