Today the moppets and I built a geodesic dome. That’s half a sphere made out of triangles, for those of you who aren’t as obsessed with architecture as my 10-year-old.

I found this site that gives instructions for how to make one out of newspapers. You basically roll two sheets of newspaper around a dowel to make a “stick”, add tape, remove dowel, repeat that process several dozen times, and then staple the sticks together.

You could go to that site, but I thought I’d give some more detailed, step-by-step instructions for other homeschool families who might want to try it.

1) Announce to the moppets, “Hey, let’s build a geodesic dome!” Try not to be offended by their blank stares followed by exasperated “Do we HAVE to?” inquiries. Show them pictures of the Epcot Center at Disneyworld to get them on board. Then explain that you aren’t actually going to Disneyworld.
2) Gather all the newspapers in the house. Track down two rolls of tape. Try to find three dowels that are the right size. Finally settle for one whole dowel and two that have been broken in half by kids using them as swords.

3) Again announce how much fun this will be. Then tell the kids they have to get to roll 65 newspaper sticks. Tell Percy Jackson-obsessed 10-yr-old to pretend she’s making arrows at Camp Half-Blood to keep her from complaining. Try to think of a horse-related use for newspaper sticks for whining 6-yr-old, then give up because 2-yr-old has started tearing up the newspapers. 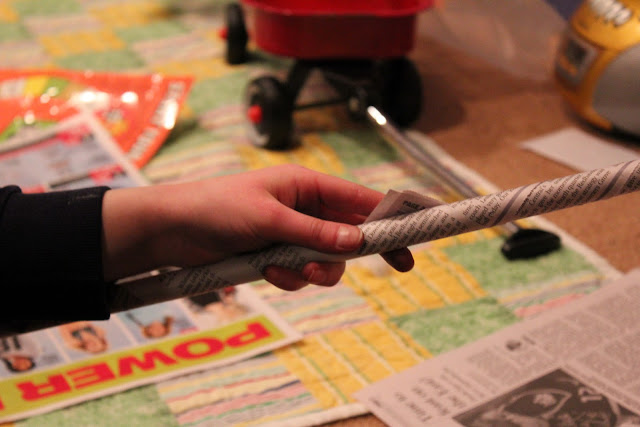 4) Make 35 sticks before running out of newspaper. E-mail homeschool group to see if someone can bring newspapers to group get-together the next morning. Put project on hold, and try to not be offended by moppets jumping for joy. 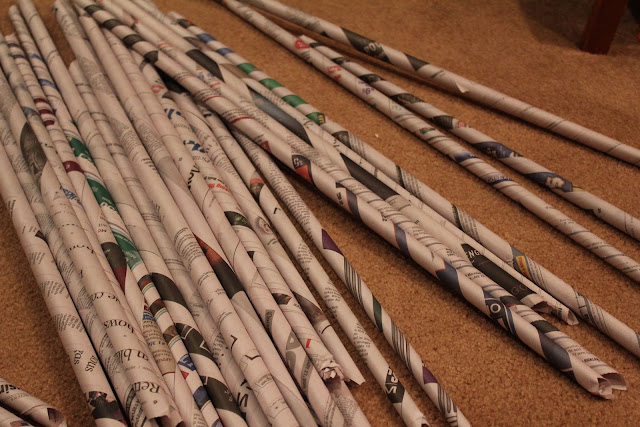 5) Two days later, have moppets roll 30 more newspaper sticks. Comfort 6-yr-old when she starts crying and “quits” because she can’t roll them as fast as her sister. Try to keep 2-yr-old from destroying rolled sticks, and gently point out to 10-yr-old that she doesn’t get to stop because she’s already made “her share.”

6) Stop 2-yr-old from pulling all the tape out of the dispenser. Distract him by having him play the digital piano. Try to mentally block out cheezy electronic version of “The Girl from Ipanema” being played at full volume.

7) Have 10-yr-old and 6-yr-old measure and cut 35 of the sticks to 71cm and 30 of them to 63cm. They actually enjoy this. Feel like a stellar homeschooler because you’re teaching your kids to cooperate while using the Metric system. 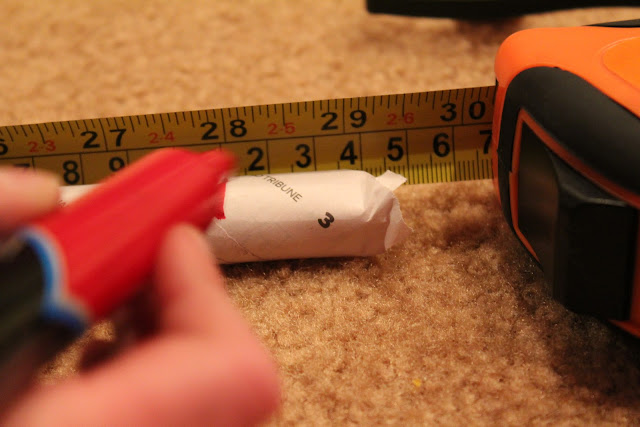 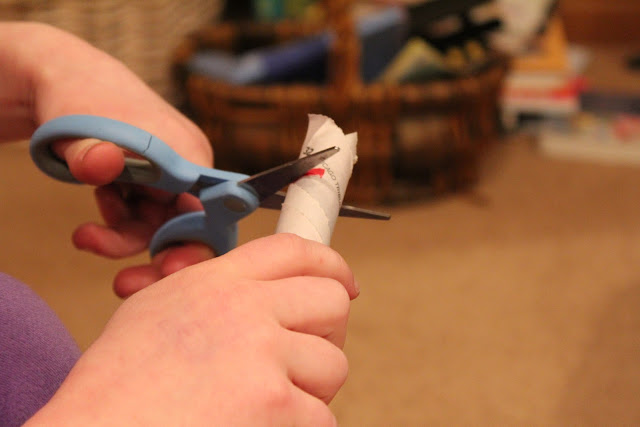 8)  Realize this is taking longer than you originally planned. Have moppets turn on a Dora video for 2-yr-old while you take a break from dome prep to get some work done.

9) Interrupt the Veggie Tales video the moppets started after Dora was over to resume dome building. Remind moppets how much fun they’re having and how super-stupendously awesome it’s going to be when it’s finished.

10) Lay 10 of the longer sticks out in a circle. Use only one stapler to make things extra hard on yourself. Let 6-year-old try to staple, then comfort her when she bursts into tears because “IT’S NOT WORKING!!!” Staple the rest yourself to move things along.

11) Help 6-yr-old feel better by letting her gallop around the “arena.” 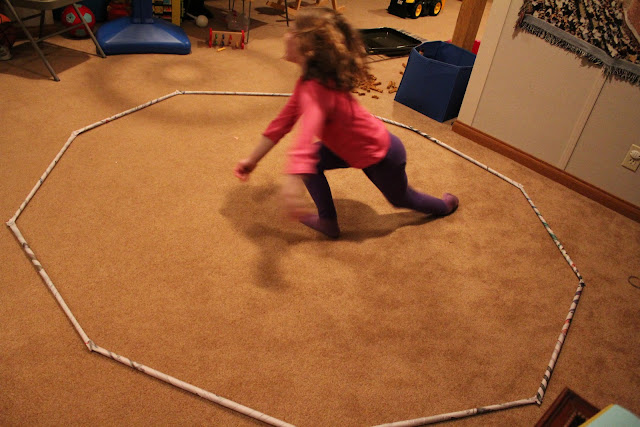 12) Lay alternating lengths of sticks in pairs at each corner and realize this project takes more space than you anticipated. 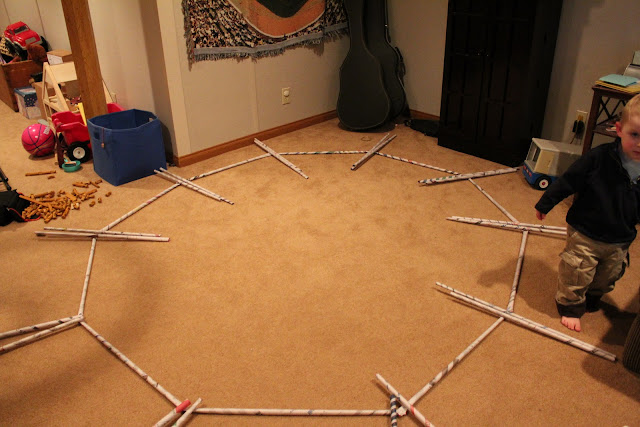 13) Staple the stick pairs into triangles, connecting them with the outer ring. Really staple the crap out of them so they’ll stay together when 2-yr-old tries to tear them apart. 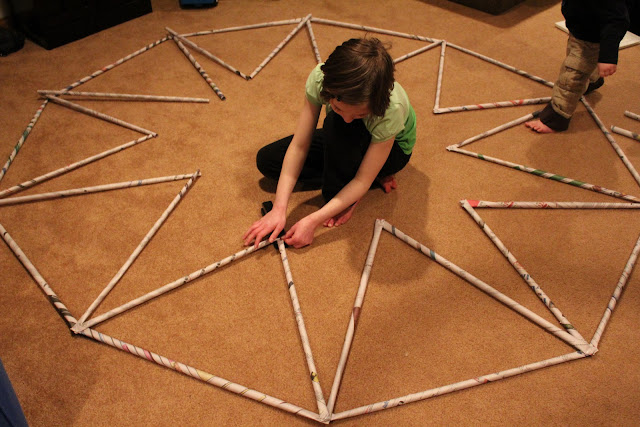 14) Enlist moppets to help prop up the base while you staple the bracing pieces on. Silently swear at the stapler because it’s struggling to make it through sixteen layers of newspaper. 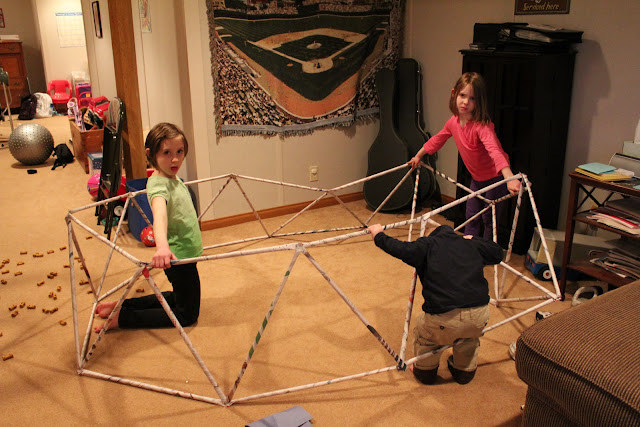 15) Wish 2-yr-old was more interested in the Veggie Tales video. Remind yourself why you don’t drink.

16) Continue cursing the stapler as you finish piecing together the dome. As it falters and falls in various places, begin wondering if you’ve missed a step. Reassure 10-yr-old when she says, “I don’t think this is going to work,” even though you just said those exact words to yourself.

17) Push the stapler to the brink by piecing and stapling the last sticks to the top. Reattach the two sticks 2-yr-old broke off trying to barge through the dome.

18) Stand back and admire the finished result. 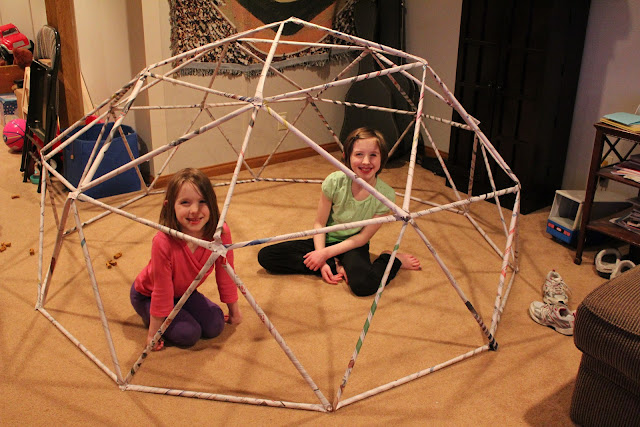 19) Pat yourself on the back. You’ve earned it. Make a mental note to reward yourself with chocolate later.

20) Revel in how much fun the moppets are having with their new clubhouse. Have them pose for a picture, so you can post your project on the Internet and let the world know what a model homeschooler you are. 🙂 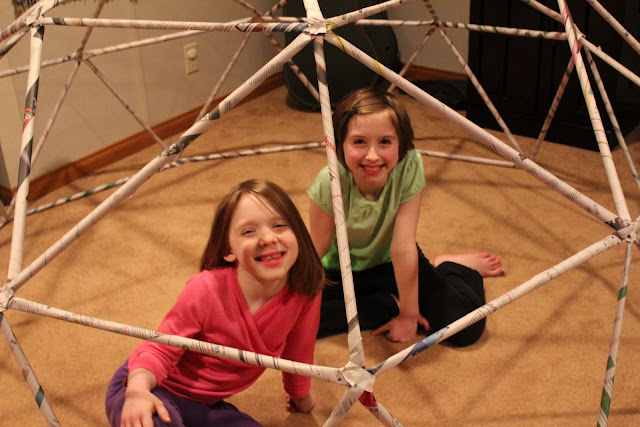