Perhaps it’s because I have three pretty awesome kids that I haven’t managed to totally screw up yet. Or perhaps it’s because I often look frazzled and harried and desperate for positive reinforcement. Whatever the reason, my kind-hearted friends and family members frequently compliment my various mom-related activities and abilities. And, God love ’em, some even toss around the loaded term “SuperMom.”

And my response, always, is to promptly laugh in their faces before spewing out a mile-long list of my weaknesses and failures as a mother, teacher, homemaker, and wife.
It’s not false modesty. My house is truly a disaster more often than not, despite my having read every organizational book on the planet. I start too many projects I don’t finish. I’ve paid enough money in overdue library fines to send at least one of my kids to college. I finally just got around to teaching my 7-year-old to tie her shoes. I’ve not been able to get a single one of my moppets potty trained before the age of three. The only reason I can type this right now is because I put a Shaun the Sheep video on for my toddler, rather than letting him empty yet another one of my tape dispensers.
So . . . No, I always respond. I am anything but a SuperMom.
Then yesterday, as I was cleaning out a closet, I came across this poster my uber-talented friend Geoff drew me for my 17th birthday. 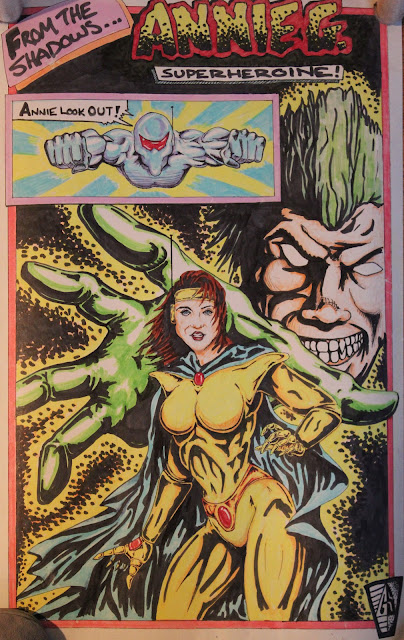